“When choosing the people on the BlueVillas Team, friendliness is number 1.Feeling like a family and making our guests feel at home is our main goal.”

Born and raised in Athens, Greece, Christos Gkekas received a mechanical engineering diploma in University. However, from a young age, Christos always dedicated his summers to help out with his family hotel in Northern Greece. After years of working in 5-star luxury hotels in Mykonos and later as a sales executive in travel agencies, Christos and a friend came up with the idea of BlueVillas, wanting to put their knowledge and expertise to use. In 2011, BlueVillas was born. Initially, they started with only 12 villas in Santorini. The next year they added 8 more in Santorini and 10 in Mykonos. Although they first started with only accommodation, they very soon learned that bespoke and personal service is important in the hospitality industry. Thus, the development of a dedicated, well-trained, and on-site BlueVillas concierge team on each island quickly arose. Within the next few years, Christos desires a growth in their hand-picked villa collection. Additionally, he hopes to increase the number of villas that are privately owned and fully controlled by BlueVillas in order to ensure high standard services with each and every stay.

Born in the U.S.A. and raised near the beautiful beaches in Nafplion, Greece, Christina Dedes holds an international identity. As a teenager, she worked as a receptionist at her hotel family business. Afterward, she helped people in need around Greece, working as social work. Finally acknowledging that she is meant to work in the hospitality industry, she returned to the hospitality industry after ten years. Helping and serving others is something she’s always loved to do, and it’s no different at Blue Villas. Hitting her five year anniversary with BlueVillas, this multitasker is an admired Villa Consultant, Concierge, and, most recently, Villa Manager. When asked what she loves most about working for BlueVillas, she answered, “Meeting new people and hearing their stories is fascinating. Having just a few minutes to gain their trust over the phone or having to ask the right questions through an email can be difficult but is a challenge I always accept. It’s worth it when you see their expression when they walk into the villa I helped them pick out: Smiles all around!”

Born and raised in Athens, Dimitris Karageorgos was fascinated by luxury tourism since childhood. As a student, he received his Bachelor in Business Administration from the Aegean University and already showed an inclination to the Tourism industry through his Thesis. Immediately after that, he continued his studies to receive his Master of Science in Tourism Planning, Management, and Policy. After that he began his career as a back-office agent in B2B operations and later on as a Sales Manager for a number of properties in Greece and Turkey, one of them being a member of the S.L.H. As a Sales Manager within a big international award-winning management company he actively managed and took part in the decision-making for a number of properties throughout Greece and abroad, providing him with a good deal of experience! Intrigued by the innovative concept of BlueVillas, the care and attention shown to the guests and the focus on detail, he joined the team with aspiration, confident that he will put his knowledge and experience to good use, all for the benefit of BlueVillas’ guests.

Amanda Adorni comes from an English and Italian background and has lived all over the world in places, such as New York, Mexico, London, and Rome. She also has the ability to speak multiple languages, including Italian, English, Spanish, and a little-bit of Greek. Growing up working at her father’s restaurant, hospitality came second nature to her. The thought of a job in guest relations deemed perfect for her. After having lived in Santorini for a few years, Amanda has become an expert on the island. Thus, it was no surprise when Blue Villas hired her as the concierge for guests in Santorini in the summer of 2015. With such a background, BlueVillas feels lucky to have added Amanda to the team. Describing her experience as a BlueVillas concierge during the summer, she said, “It is a pleasure to share what I know about Santorini with BlueVillas guests so they can really discover the island. It is also a pleasure to give guests a feeling of security while they are here, that I am there for them if they need me. I like to play a part in making Blue Villas guests have a holiday that will stay in their hearts forever. You can't be a good concierge if you do not truly love people and the place you are in.”

Born-and-bred in Greece, Nikos Nezeritis has loved cooking for as long as his memory holds true. He has worked as a chef in hotels, catering businesses, and restaurants -  that is until BlueVillas scooped him up for themselves. Since then he is the man behind the BlueVillas gastronomy concept. Every year, he creates the chef team around him after he communicates the company values to the new members and teaches them the unique BlueVillas concept and service. When he cooks, he prefers Greek and Mediterranean dishes - or rather anything he can cook with pure and biological ingredients. "Health and creativity is what matters the most", as he says. “After cooking in my kitchen all day, it’s a very nice feeling to serve the guests and watch them be impressed with my creations. And, the incredible view from the villas just completes the entire experience!”

Marina Stefanaki was born and raised in Crete. With Bachelor Studies in Business of Tourism and many years of working experience in the Tourism Industry at the most famous Greek Islands -Mykonos, Santorini, Crete- in several positions (as a Flight Attendant, Tour Guide, Spa Manager, Front Officer Desk and Concierge in 5-star hotels) hospitality became her second nature. Marina loves traveling around the world and she has lived abroad in several countries such as The Netherlands, England, Romania, Cyprus. Her personal state of mind is: "Always make people smile, feel comfortable and safe at home, no matter what". She is one of the new members of BlueVillas.Marina is here to embrace and preserve Mykonos’ beauty while pairing an extraordinary Personalized Concierge Service Weddings/Events/Private Parties Tailor-Made, Restaurant/ Clubs/ Beach Bars Reservations, Helicopter/Yachts Tours and everything you had dreamed of. Prepare your luggage … Fasten your seatbelt ... and she will take care of the rest!

Calliope Paparitsidi, our newest member of BlueVillas, joined our team at the Concierge department. She graduated from Pandeion University of Athens, holds a degree in Sociology and Master studies in Hospitality & Tourism Management. Abandoning her career in the Ministry of Culture in 2013, guided by her passion in communication, traveling and the natural desire in human interaction, she decided to set off her professional career in Luxury Tourism industry. Born in Mykonos island, which considers being the ultimate Greek destination of Luxury tourism, gave her the chance to infiltrate and discover her love in customer care services while operating in her familiar and beloved land. Calliope developed her passion for real estate and Luxury villa rentals, while she has been working in the Travel industry for the past 5 years, with prominent agencies having experience in the high-end market. Consequently, her expertise in the sector, the understanding of fine hospitality, which is led by our major priority on serving happily BlueVillas clientele and her personal perspective as a local synthesizes a promising participation in our company.

Christina Siatra was born and raised in Athens. Some years ago, she dreamt of becoming a teacher and pursued her bachelor in English Literature. This dream did not last for long since after her graduation she got a job in the gaming industry. You 're thinking "Much better!". Yeah, it was! There, she realized how much she likes teamwork and communication and fortunately, she pursued this dream instead! Her master’s degree in Digital Communication and Social Media, combined with her love for traveling and tourism, made her part of the Blue team. Christina loves meeting new people, new experiences and talking about it. As she says, “Looking for unusual experiences, finding interesting stories, listening to our audience, writing for them, is what I enjoy the most.”

Born and raised in Athens, Angeliki Nikolopoulou discovered her passion for traveling and design very early.  She pursued her dream to become a graphic designer and designed a travel magazine for Greek islands as her first job. This was the first spark for her love for tourism, where she ended after spending a great amount of time in publications and the fashion industry next to recognizable brands and professionals in the field. Luxury hospitality was a very intriguing field of her creative mind. Her experience and forward thinking made her part of the BlueVillas team. Her motto is “Everything is aesthetics”, which she tries to apply in her everyday life. Her inspiration comes from classical music and frequent visits to fancy exhibitions and talking with artists.

Βorn and raised in Athens, Athanasia Mountala studied Political Science and Public Administration in NKUA. Philosophy, diplomacy political analysis fascinate her, but it was her love for creativity that led her to MSc PRIMA: International Marketing in AUEB. After completing her studies, she joined an international travel metasearch in Dusseldorf, where she gained valuable knowledge about the hospitality industry, online marketing, data analysis and project management. It was there that she discovered her passion for data-driven marketing and how much she enjoys working in a multi-cultural environment. Deciding that Greece has always been her dreamland, she joined BlueVillas team as Digital marketing manager with the aspiration that she would put her skills, dedication, and passion into work to make BlueVillas a strong international player in the Luxury Tourism Industry. As she likes says “constantly learning, visiting new beautiful places and experiencing the best services is what makes life worth living”. 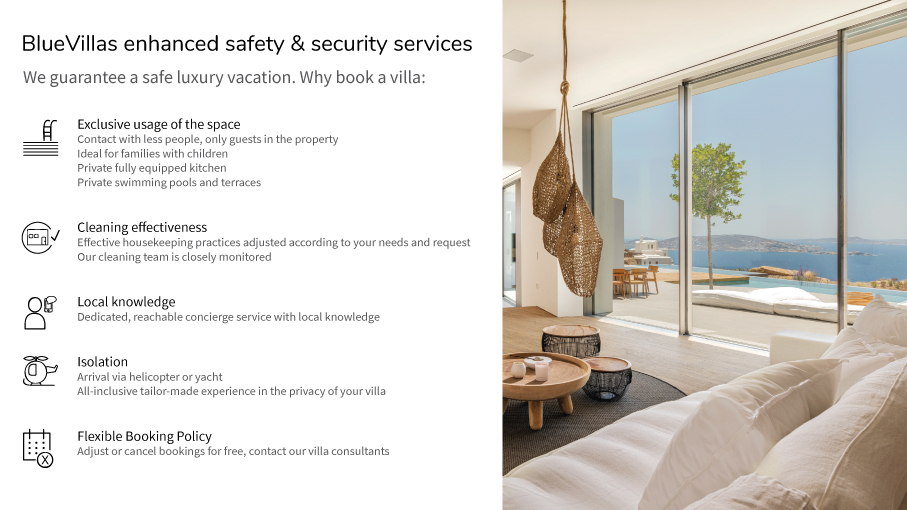