Battle of the Giants 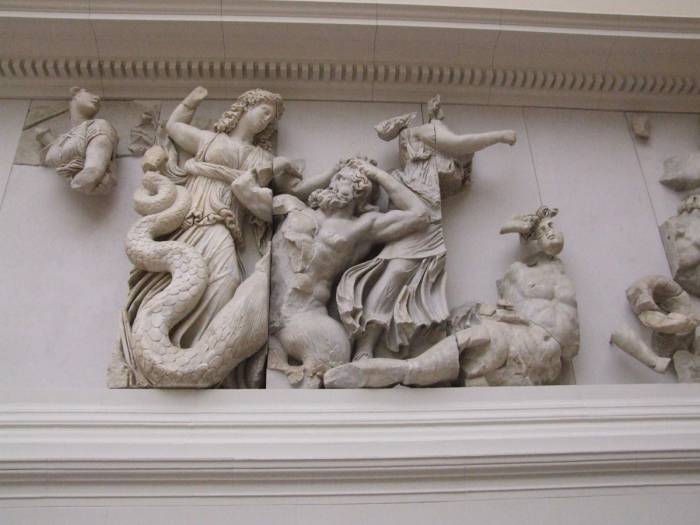 It is believed that Mykonos was named after its first ruler Mykons, a local hero, who was considered to be the son or grandson of the god Apollo, the blond God of music and light.

However, there is another great story about Mykonos in ancient Greek mythology. The island was supposed to the final battlefield of the great Gigantomachia, the battle of the Olympian Gods with the Giants.

Gaia (the goddess of Earth), angry with the Olympians by the imprisonment of the Titans (the original giant and fearful creatures Gaia created) in Tartarus, asked the Giants to rise up in arms against them, end their reign, and restore the Titans' rule. The Giants did as they were told and actually managed to reach the top of Mount Olympus and wreak havoc.

The Olympian Gods called upon the aid of Hercules, after a prophecy warned them that to defeat the Giants, the aid of a mortal was needed. Goddess Athena was instructed by Zeus to seek out Hercules and requested his participation in the battle.

The Giants were invincible while they stayed in the protected area of Mount Olympus, but Hercules managed to lure them out of there and slay them by shooting them with his poisonous arrows.

The poison on those arrows was a “trophy” from the second labor of Hercules, the Lernean Hydra. Near a place called Lerna, the Hydra, a monstrous serpent with nine immortal heads, would rise up from the waters of a swamp and terrorize the countryside by attacking with poisonous venom.

Hercules’ task was a tricky one because every time he cut off one of the beast’s heads, two more would spring forth in its place. Thankfully, he had the help of his nephew Iolaus. The plan was that each time Hercules cut one of the Hydra's heads, Iolaus would hold a flaming torch to its neck, preventing the growth of the other two heads. Finally, Hercules had the better of the beast and, in the end, he slit open the corpse and dipped his arrows in the venomous blood.

Hercules’ poisonous arrows were key to the outcome of the Gigantomachia, even though all the Olympian Gods, as well as lesser Gods and Elements were doing their part. Zeus was shooting lightning bolts, Athena was burying them under islands (like Sicily), others were using mountains, giant flaming torches, giant clubs and generally doing what Gods do in epic battles.

Any Giant that had managed to escape fled to Mykonos where he was swiftly killed by Hercules. It was believed that the large rocks which lie scattered around the island are actually the petrified corpses of the Giants.

Myths, legends and so much more! Epic times await you at a Mykonos luxury villa!