Santorini - Life is just a bowl of tomatoes 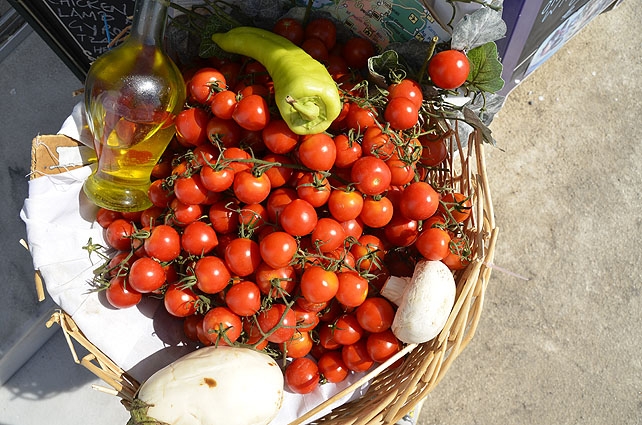 A caprice of nature, Santorini's trademark baby tomato, known as “tomataki” or “tomatini”, is as sweet, delicious and aromatic as it is tiny. An untrained eye could easily confuse it with a cherry.

With a characteristic flavor derived from the volcanic soil, the tomatini or tomataki is truly one-of-a-kind. Benefitted by the sparse rainfall, the strong winds and the high daytime temperatures, the fruit grows exclusively on Santorini and does not thrive anywhere else on the planet. Agricultural scientists are still not certain whether the baby tomato got accustomed to Santorini's climate and soil conditions or if it belongs to an altogether unique species.

The tomatini plant first arrived in Greece in 1818, when a Christian monk named Fragkiskos, from the Capuchins Monastery, brought the first seeds. The first signs of organized cultivation have been reported in 1875. The fact remains that from that day to this, the variety has not changed at all, nor has it been implanted with another variety.

The baby tomato went so well, that by the turn of the 20th century 20,000 acres were being harvested and 14 processing factories were in operation. But the greatest boost to production was offered by Lenin. With the Bolshevic Revolution, the churches of Tsarist Russia closed. Since Visanto wine (also a product of Santorini) used by the Russian priests during Communion became redundant, Santorini decided to promote its next best exportable commodity: the tomatini.

Tomato cultivation flourished until the 1950s, when it suffered a huge shock by the massive earthquake of 1956. The second blow came with the introduction of mass tourism, when many farmers left the traditional agricultural activities behind, to venture into the more lucrative business of tourism. As a result, there were very few people engaged in tomato cultivation and what used to be an everyday food item, soon became a luxury food product.

If you fancy yourself as a bit of a food connoisseur, you must visit the tomato paste factory in Monolithos and see the process of all the little tomatoes being pulped and canned into delicious tomato paste. The best time to savor the Santorini tomatoes is during the months of June, July and August when the tomatoes are fully matured. The tomatokeftedes (fried tomato balls) dish, with a blend of native Santorini herbs is a must-try.

New flavors, new sensations, new memories, all from one island.
Don’t miss the chance to experience it all, at a Santorini luxury villa!