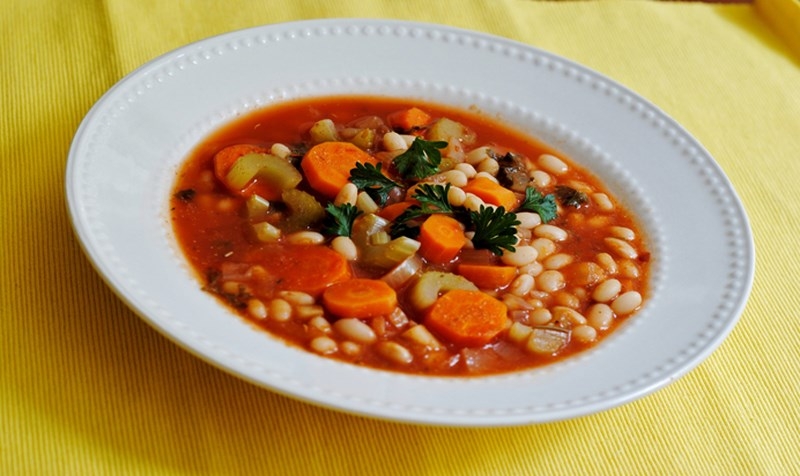 Spring may be underway but it’s probably still cold where you are, so it’s an opportunity to get acquainted with Greek gastronomy and mythology. In western countries, most people are used to eating beans from a can but, in Greece, this is unheard of. Beans and other pulses are very popular in Greek cuisine, offering a tasty and healthy alternative to meat dishes, always cooked in olive oil.

One of the most popular traditional and hearty dishes is bean soup, known as “fasolada” or “fasoulada”, from the word “fasoli” which means “bean”.

Also known as “the national food of the Greeks”, fasolada is made by:

Simmering dried white beans with chopped tomatoes (or tomato puree) and other vegetables such as carrots, onion, parsley, celery, and bay leaves, with lashings of olive oil.

(Recipes vary considerably and lima beans are sometimes used instead of white beans.)

The dish originates in ancient Greece, as a sort of vegetarian stew of beans, vegetables and grains, and was used as a sacrifice to the Greek God Apollo at the Pyanopsia festival.

According to the myth, the custom was born when Theseus sailed from Athens to Crete to kill the Minotaur. On the way, he stopped in Delos island (right by Mykonos), and made a sacrifice to Apollo, promising that if he manages to win the battle and kill the beast, he would offer the God olive branches decorated with fresh fruit, to thank him.

On his return, following the adventure in the Minoan palace labyrinth, Theseus stopped in Delos again, to fulfill his promise. However, it had been seven days since their departure and no food was left on the ship. So, Theseus’ shipmates gathered anything they could find, and cooked it in a stew, making the original fasolada.

Taste this humble dish or any other sumptuous Greek delicacy at a Blue Luxury Villa in Mykonos, Santorini, Paros, or Crete. It’s your choice!